"For those with a taste for creative invention in the moment, for those happy to trade canned musical ideas for new sounds, Mouse and Robinson are a duo with a musical soundscape all their own."

ree form duets on this collection of musical conversations…Adventurous yet accessible."

“Robinson and Mouse are clearly playing off one another just to see where the music can take them rather than where they can take the music.  So this isn’t really an album, but a performance – and a delightful one at that.”

“An easygoing rapport and quicksilver interaction…a relaxed but alert series of musical give-and-take…Buoyant, slaloming lines or elliptical shapes gliding over the melodic figures of Mouse, who never lets his lyric proclivities get in the way of his timekeeping.”

“The playing is right on, and if Coltrane/Elvin Jones explorations are your cup of tea, this set is a long overdue addition to your starving record collection.”

“An artistic duet of provocative sounds and rhythms… I was fascinated by the sheer beauty of their musical experimentation and improvisational wit.”

“Excellent duo collaboration… Sometimes the conversation consists of acerbic phrases while other times it’s a free flow of strong imagery.  Either way, the dialog is vivid, engaging and freely improvised.”

Dave Sumner, This is Jazz Today​

“The music created by Robinson and Mouse is progressive, but accessible, and while ‘Snakeheads & Ladybugs’ lacks compositional forms, it more than compensates with abundant creativity.”

“…A dozen aural concoctions that mark these men as players with big ears and strong communicative skills.  Mouse and Robinson relish the opportunity to let go and explore the musical outer reaches together (with) great sensitivity… These on-the-spot creations are highly-focused explorations that invite the listener in as a near-equal party.”

Dan Bilawsky, All About Jazz

“There are no written compositions here, simply perceptive and spontaneous improvisation between two inordinately accomplished musicians…Free jazz?  In their intuitive interplay, Mouse and Robinson profess an unswerving allegiance to melody, harmony and rhythm that prevents 'freedom' from morphing into rampant chaos.”

Jack Bowers, All About Jazz 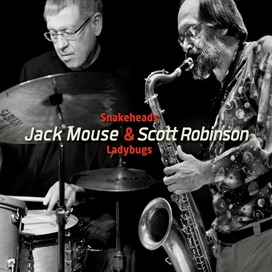 "These two have created their own form of intimate jazz that demands the attention of your aural appendages...I give this great duo a MOST HIGHLY RECOMMENDED, with an “EQ” (energy quotient) rating of 4.99 for this album."
Rotcod Zzaj, Improvjazznation

"Free improvisers and jazz purists alike will revel in the experimental energy and improvisational skill displayed by these two seasoned pros… A great opportunity for drummers to hear a stripped-down instrumentation in order to study the subtleties of touch and color of Mouse’s drumming.”

"They feed off of each other in a coordinated, dynamic collection of modern free jazz… Hats off to Scott and Jack for dancing on the edge."
D. Oscar Groomes, O's Place Jazz​

“The pieces work equally well as discrete entities and one continuous program… The core component in each of the interactions whether extended or succinct is spontaneity, allowing each to unfurl in an unfettered fashion.”

“…A mutual exploration concept, where spontaneity is the rule… moments of radiance; melodic and harmonic beauty; and auditory inclines which drift from cinematic to boppish, funk-oriented to bolero.  Turmoil does not run unbridled, and jazz conventions are not thrown to the floor, although this is unconstrained jazz. “

"This unique CD is both thought-provoking and, in its own way, quite charming.  It will definitely impress and engross open-minded fans of cerebral music." ​
Hrayr Attarian, Chicago Jazz Magazine